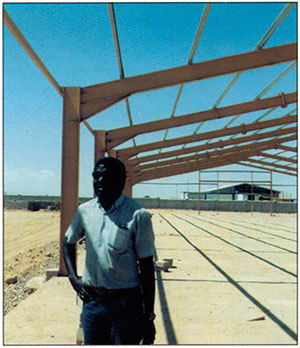 The plane from Addis Ababa to Djibouti settles onto the tarmac and taxis in two hours late, past an outgoing DC3. I arrive breathlessly at the transit desk to confirm that it was my flight to Hargeisa that I just missed. The next 23½ hours imprisoned in the transit lounge with only flies for company, lets me read all three novels bought for the whole trip, the two newspapers, the duty free price list, all the cigarette and perfume advertisements and the instructions on how to use the broken fire extinguisher, as well as mending the toilet flush mechanism.

One particular four hour period is more frustrating than the rest. Through various chinks I can see and hear a party of French Foreign Legionnaires having an uproarious time, drinking French wine and playing with their entertainers in another lounge nearby.

Next day, despite being first in the queue by some 21 hours, the hustle and bustle of getting through various procedures mean that I nearly miss this day’s plane as well.

The airport at Hargeisa is a cute little RAF station built in 1939 when Northern Somalia was British Somaliland, and has changed little since except for wear and tear, fair and unfair. Thank goodness my host has the patience to wait for the flight – because there are no phone lines between Djibouti and Hargeisa, and no maps or information booths.

The transport provided is in the motor age, but only just: an aged pick-up with no side windows, a door missing and Pepsi crates inverted over holes in the floor for seats. We rattle our way noisily along roads built by the Ministry of Building and Public Works in 1948 and not repaired since. My host apologises for the vehicle; any reasonable car would have been confiscated by the police or the army. Both these corps are officered and manned by Southern tribes from ex Italian Somaliland around Mogadishu. They have no love for the Northern tribes and a posting to the north is a punishment only alleviated by their being able to steal anything available from the locals. Nobody steals our truck!

Leaving the town, we approach a ramshackle roadblock. My host laughs, says “Watch this,” and accelerates and then takes his foot off the accelerator. The rickety exhaust pipe explodes in a series of bangs. Soldiers on the road block race for cover; one caught leaving the better part of his being in the desert actually bounces away sack race fashion with his trousers around his ankles – great fun. We then stop for the road block, get scolded and allowed to proceed. “I am safe with you,” says my host. “You are my white passport.” Very comforting; I had hoped to be safe with him.

We proceed thus for about a hundred miles, past several similar road blocks, past several refugee camps where a quarter of a million Somalian tribes people (who used to live in the Ogaden before the Ethiopia-Somailia Ogaden War) now reside courtesy of UNHCR, before eventually arriving at our work site, a series of grain stores with workshops, offices, ablutions, a power station and a water tower, designed, made and exported by Reids.

I inspect the local workforce provided, about 200 tribesmen, some from the refugee camps, some from the local populace, but all having in common completely open minds on the subject of construction. Simple concepts such as the nut and bolt are a source of great wonder to camel herders who have never been exposed to them, so it takes a while to get going. Levels, spades, hammers and nails are dug out and put to work and in a short time we are pouring the first footing. Two days later, in the searing heat, the steelwork is able to be erected. The columns are manhandled up; a crane provided by UNHCR mysteriously only works for short periods following the insertion of an enormous wad of Somali 100 shilling notes into the operator’s overalls, so we have to put the rafters up quickly during the brief hours of lubrication. The wad has to get thicker daily as inflation is rampant.

As usual the crowd of helpers thins out to a dozen or so who are mastering right hand threads and the mystery of ladders and screwguns; erection proceeds amazingly well. In a very few weeks of such amusement the camp is up and running. Om the airfield at Berbera I meet an ageing English World War II pilot complete with moustache, now grey. With tears in his eyes he tells me of the hurricanes he flew here against the Vichy French in the war, and nothing has changed at all since then – except of course our new sheds.

I reverse my route, glad to have been there, gladder still to go home (and make my visit to the Hospital for Tropical Diseases in London). Days later, the Mogadishu government hits on the idea of arming the refugees in the camps and advising them they could kill the locals and take their homes. Frustrated from years in the camps they set about their task with gusto. The entire population of Hargeisa and most of the other towns, if not killed, is evicted to refugee camps in Ethiopia, many with pieces missing where earrings or rings prove bothersome to take off conventionally. The Ethiopian Somalis settles into their new homes. I had just missed a horrid civil war – one that is still dragging on now (February 1991).

This desolate scene is Berbara Harbour. The foundations in the foreground have been ready since 1948 for navy warehouses that were never built. The rusted freighter is aground and abandoned and the Dhows and barges are derelict too. The whole scene reminds me of those novelist’s descriptions of the desert areas of South West Africa around Walvis Bay where the bodies of ancient mariners were found several miles inland, dried up and preserved in salt dunes 100 years ago.